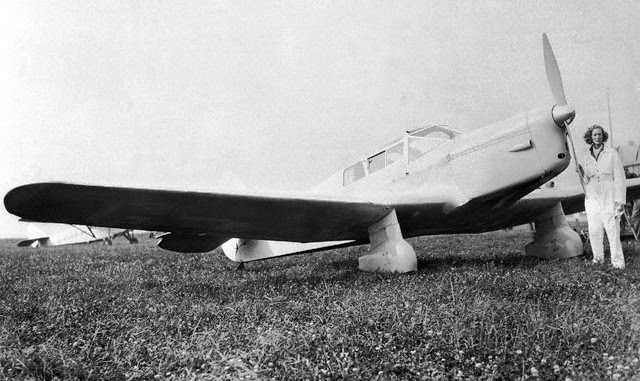 Mrs Beryl Markham, the British airwoman who was slightly injured in a forced landing in Germany on Thursday, returned to Heston Aerodrome yesterday. She flew back in a small plane none the worse for her experience. Mrs Markham is the wife of Mansfield Markham, second son of the late Sir Arthur Markham, the millionaire colliery owner. Sir Charles Markham is her brother-in-law. In May last she landed at Heston Aerodrome and surprised everyone by stating that she had flown alone from Nairobi (Kenya)

This was taken from a newspaper article in the Guardian dated August 13, 1932

On April 24, 1932 she departed Nairobi crossing the desert and the sea, navigating by sight and with no radio equipment on board, stopping along the way for engine repairs, to her unexpected arrival at Heston Aerodrome on May 17!!  I am trying to determine where she crashed in Germany. Still amazes me that she covered all this distance and she is not recognised for this either.
at Thursday, September 16, 2010 No comments:

LETTER TO THE EDITOR

Below is a letter that Beryl wrote to the Editor of the Daily Express before her epic flight across the Atlantic:

Letter to the Editor

As I am now on the eve of what I believe a rather hazardous flight. I would ask the usual courtesy extended to the condemned to state some of my views.

I notice that I have been frequently captioned in the press as “Society Mother”, “Flying Mother”, “Bird Woman” etc.

The phrase “society” is repugnant to me. I have no pretensions, and fail to see that bearing an accident of birth has had to do with flying the ocean.


I may be “just another blonde” but as a professional pilot accustomed to working for my living , and as this flight could not even in my wildest dreams be described as pleasure. I look on it as merely another job of work.
When I am asked my reasons for going. I give varying explanations every time. As adequate a reason as any other is that, whatever the result of my efforts. I shall not have laboured in vain, as it will give a very real friend – no other than the bold , bad Jim Mollison – an exellent excuse for celebration or the reverse.

In describing my, as yet, unaccomplished but no doubt amazing exploit, please give me the credit of being and ordinary human being without to many of the conventional virtues.

I can laugh,love, hate, and occassionally fall in at the local off-licence to hear the views of my fellow beings.

I am neither an innocent girl from thecountry or a city slicker, but an ocean flier in embryo. If I can dispense with the last to words I am more than satisfied.

The official date that Beryl divorced Mansfield Markham was on the 31 October 1939. There has been so much speculation about her "affair" with Prince Henry, The Duke of Gloucester and so much written about their liason that claims were made that he was the co-respondent in the divorce and that she recieved an annuity for life from the palace, this is untrue. Beryl did have a "fling" with the Prince Henry, for a while but her attention was soon drawn to Hubert Stanford Broad
http://en.wikipedia.org/wiki/Hubert_Broad
and it was to him she rushed back, after her epic flight across the Atlantic. He was the one that was named as the co-respondent in her divorce decree. However this relationship did not last and came to an abrubt end after a year.
at Thursday, September 09, 2010 No comments:

THE RECOGNITION SHE DESERVES

Go to the following link and and read all about Beryl Markham:

I will be interviewed by Jo Thoenis (prounced Toonis) and  will be talking about Beryl Markham and her historical Atlantic crossing.

Today I have been doing research on Berly Markham and it has been absolutely wonderful. Going from one research webpage to the next on the net, just fascinates me at the amount of knowledge that you can draw from discovering information . I started this morning and before I know it, time has flown away with me and it is is early evening now.

The reason I am doing this research is to put together a truthful event of what happened to Beryl Markham and to rectify the myths that surrounded her. On the 3 of September 2010, I will be giving a talk on Beryl at the Abingdon Rotary Club, this talk will coincide with the first successful solo crossing she made across the Atlantic on the 4 September 1936 at 06H50 and  crash landing in Nova Scotia. Keeping in mind Beryl made this crossing from east to west against the prevailing winds. She was an awesome woman!!..... I take my hat off to her.
at Sunday, August 22, 2010 No comments: